Ildikó Raimondi is not only a celebrated singer on the opera stage, but is also a well-known recitalist and interpreter of Lieder. Since 1991, she has been a member of the Wiener Staatsoper where she has sung over 50 opera roles.

Guest performances have taken the Vienna-based artist to the Deutsche Oper in Berlin, the Semperoper in Dresden, the Bavarian State Opera in Munich, Zurich Opera House, Valencia Opera House and to the Bolshoi Theatre in Moscow, amongst others. Her numerous concerts, radio and TV appearances with acclaimed orchestras such as the Vienna Philharmonic have taken place all over Europe, in Japan, New York and Israel.

Her recitals in the Wiener Musikverein and in countless towns both home and abroad continue to set the benchmark for interpretation and programming. As part of a large-scale research project, Ildikó Raimondi published the collection of 41 Goethe Lieder by the Czech composer Wenzel Johann Tomaschek.

Ildikó Raimondi’s most recent performances at the Wiener Staatsoper include Dame (Cardillac), Donna Elvira (Don Giovanni), Rosalinde (Die Fledermaus), Pamina (Die Zauberflöte), Alice (Falstaff), Musetta (La Bohème) and the première of Iván Eröd’s children’s opera “Pünktchen und Anton”. She has sung the role of Gräfin (Capriccio) at the Palace of Arts in Budapest and gave a guest performance as Arabella at the Hungarian State Opera.

Her artistic career has been well documented through numerous CD and DVD recordings as well as radio and TV broadcasts.

Ildikó Raimondi is an Austrian Kammersängerin and an Integration Ambassador.
She has been a Professor of Solo Singing at the Salzburg Universität Mozarteum since 2015. 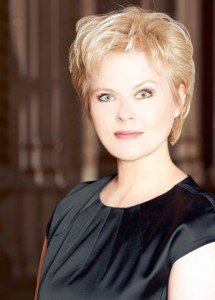